Death of a Man

“Everyone in Akron should see this show.”
-David Ritchey

“Death of a Man” received rave reviews from the KO Festival of Performance in Amherst, MA this July.

“Death of a Man” is a solo performance conceived by and featuring Colombian actor, long-time Akron resident, and NWPL Co-Artistic Director Jairo Cuesta, and directed by University of Akron theatre professor and NWPL co-artistic director James Slowiak. In this moving evocation of the jungles of the Amazon where countless indigenous men, women, and children were mutilated and massacred in the mad search for natural rubber, Cuesta seeks to lead the public on a quest for the sources of a city’s sorrow. Through his virtuosic physical and vocal skills, Cuesta enacts a ritual of storytelling, a sacrifice to heal the city by confronting the violence and blood on which the city is built.  “Death of a Man” is an attempt at authentic intercultural understanding by reengaging the past and bringing it alive in the present. The performance is not meant to sentimentalize the story or merely invoke empathy, but to interrogate, criticize, and empower by opening a dialogue between text, past, present, performer, and audience.  The performance event is based loosely on John Tully’s book, “The Devil’s Milk: A Social History of Rubber,” along with other historical and fictional sources. Cuesta and Slowiak traveled to the Amazon in 2016 where they engaged in meetings with members of the indigenous community represented in the performance. This intercultural exchange was made possible, in part, through a grant from the Network of Ensemble Theaters’ Travel & Exchange Network (NET/TEN), supported by lead funding from the Andrew W. Mellon Foundation and the Doris Duke Charitable Foundation. 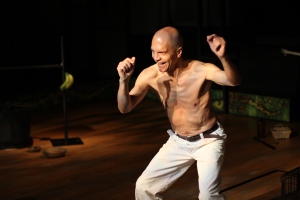 NWPL began to devise “The Devil’s Milk Trilogy” in intensive two-week work sessions between March 2015 and December 2016. Each work session culminated in an open rehearsal and talkback session with the public.

Admission is free.
Seating is limited.
For tickets call 330-972-7895.
Each performance will be followed by an audience talkback session.

The Devil’s Milk Trilogy is funded in part by a grant from the John S. and James L. Knight Foundation, as part of its Knight Akron Arts Challenge.