Look for The Devil’s Milk in your neighborhood!

Catch “Death of a Man: The Devil’s Milk, Part One”
at the University of Akron
September 8th and 10th 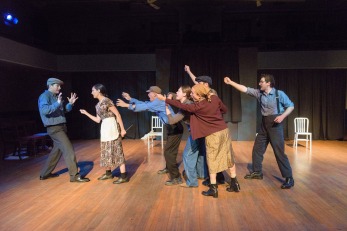 New World Performance Laboratory presents the world premiere of “The Devil’s Milk Trilogy,” three new plays about Akron and its relation with rubber and the rubber industry. The Devil’s Milk Trilogy is funded in part by a grant from the John S. and James L. Knight Foundation, as part of its Knight Akron Arts Challenge.

NWPL began to devise “The Devil’s Milk Trilogy” in intensive work sessions between March 2015 and December 2016. Each work session culminated in an open rehearsal and talkback session with the public. Each part of the trilogy stands on its own as a performance event and takes on a very distinct theatrical form and style, providing a stimulus and forum for a frank discussion about the city and the rubber that shaped it. A grant from The John S. and James L. Knight Foundation helped pay for artists’ stipends during the development process and allowed CATAC/NWPL to offer ensemble members and local theatre artists the opportunity to refine their craft. Further funding for the project has come from the Char and Chuck Fowler Family Foundation, Ohio Arts Council, and the Akron Community Foundation.